One of the most beautiful medieval cities in Europe

Sighisoara, nicknamed “The Pearl of Transylvania”, is a medieval town that houses a fortress which seems to be straight out fairy tales. It is the ideal place for romantic walks on the cobbled and narrow streets, for forgetting about the stresses of the modern lifestyle and for rediscovering medieval life. Although time has left its mark on the city, the cultural and historical richness seems to be amplified by each tourist who is impressed by everything that Sighișoara has to offer. 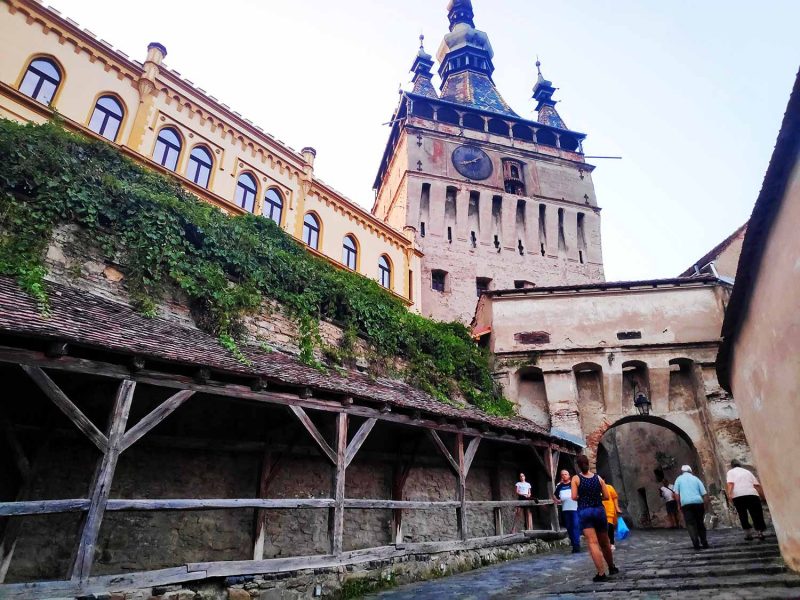 The first documentary attestation of Sighișoara was made in 1280, under the name of “Castrum Sex“. In 1339 it became a county, and in 1367, a city. In the Middle Ages, the fortress was often subjected to Ottoman attacks. Despite the trials it went through during the 16th century, Sighișoara was a very important player on the Transylvanian political scene. Subsequently, the periods of Habsburg and Austro-Hungarian rule followed. In 1940 the Romanians became the majority population, and in 1968 Sighișoara became a municipality.

One thing worth mentioning in this regard is the fact that Vlad Țepeș was born in Sighișoara, a historical figure and, at the same time, the source of inspiration for Bram Stoker’s main character in his book, Dracula.

The city is surrounded by tall hills, and the neighbouring counties are: to the north – Bistrița-Năsăud, to the east – Harghita, to the south – Sibiu and Brașov, to the west – Cluj and Alba.

The Sighișoara Fortress was built in the 12th century by the Saxons and is still in the same place to this day. In the 14th century, under the fortress, various craftsmen settled in strong guilds and built a stone defense wall around the fortress, with 930 meters in length and 4 meters in height.

Today, the fortress has 14 towers named after the guilds that built them. Sighișoara Fortress is considered by many to be the largest medieval fortress in Europe inhabited without interruption, but also the best-preserved city fortress in Transylvania. 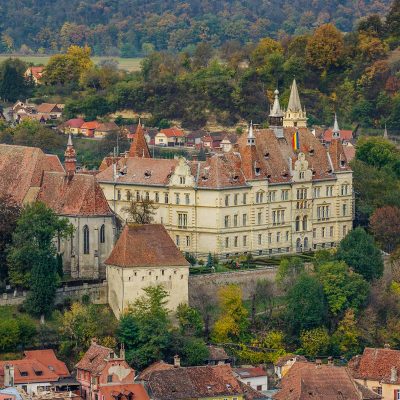 The Covered Staircase was created to facilitate students’ access to the Hill School. Today, the staircase has only 174 steps, although initially there were 300. The staircase is grouped in six steps, followed by a linear space, that represent the 6 working days and one of rest. Some argue that even Hermann Oberth, a student of the Hill School, climbed the Covered Staircase. Hermann Oberth was a famous researcher with important contributions in the invention and development of missiles and is considered one of the founding fathers of astronautics. 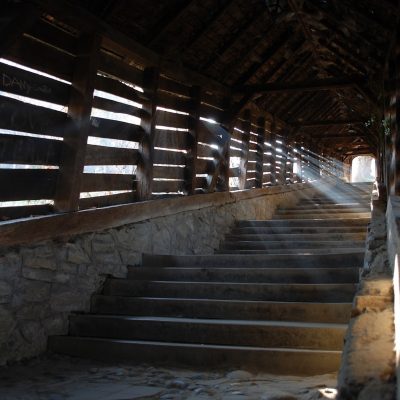 The Clock Tower with a height of 65 meters and on 5 levels is one of the symbols of the city that was erected for military purposes, with the aim of protecting the fortress. In the 16th century, the roof of the tower had four small towers, that were symbolizing the status of the city, which was in favor of the death sentence. For instance, in 1704 the mayor of the city received the death penalty for counterfeiting the currency of the City`s Treasury. On the clock tower seven ancient deities made of linden wood can be observed that symbolize the days of the week naming, the Goddess of Justice, the Drummer, the Justice and the Sunrise among others. Once a day, the statues rotate at 00.00 and mark the beginning of a new and better day. 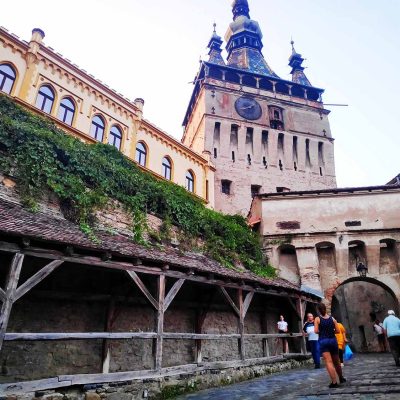 It is also the church where George Rákóczi I was elected Prince of Transylvania and King of Hungary in 1631. 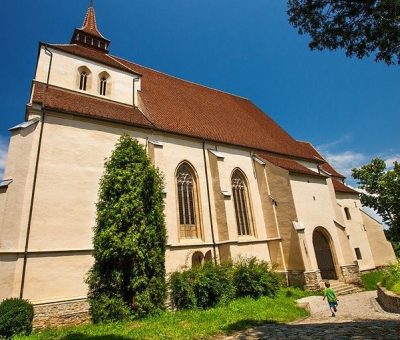 The nearest airport to Sighisoara is at Sibiu, 73 kilometres away.

Sighișoara can be reached by train – Bucharest – Brașov – Teiuș rail route, with derivations to Arad and Cluj-Napoca – Oradea.

If you prefer a faster option, you can choose to travel by bus/minibus. Here you will find all the necessary information for this: bus stations and stops, departure and arrival times, destinations.

You can reach Sighișoara by car on the following routes:

Music Festivals and other attractions in Sighișoara

If you like music festivals, in Sighisoara you will find one to your taste, regardless of the style of music you prefer. Here you have a list with some of them: